The easiest way to learn and speak Chinese is Pinyin. The Romanized form of Mandarin Chinese contains combinations of English syllables and diacritic characters placed above syllables as tones. Every character of the Chinese language has its meaning in pinyin.

Below you will know the difference between Hanzi & Pinyin:

我是中国人 is written in hanzi.

Each character in Chinese represents one syllable and can be spelled out phonetically in pinyin.

I’m sure you’ve read many words and names like Xi’an or Qin Shihuang and have no idea how to pronounce them.

When learning pinyin, the most important thing to know is that pinyin is not pronounced exactly as you read it in English. For example, ‘he’ is NOT pronounced like ‘h-ee’, instead, it sounds like ‘Kh-eh’.

Every word has at least three parts: an initial, a final & a tone. 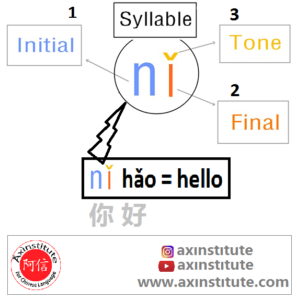 Initials are basically the consonants from English alphabets except for V, W & Y with their replacements. A clear representation of initials is shown in the chart below:

It wouldn’t be wrong if I tell you that finals in pinyin are the vowels or combination of vowels from English alphabets that create the basic sounds. Some finals also include “n & g”. We have placed a chart below for your clear understanding of Finals:

Also, there are some special finals, which are made by combining sounds of finals and they’re not used that often. The below chart shows the details:

The last but the most important element of a pinyin word is a tone, without a tone it is a normal word in English. The tone is always placed above any final in a syllable to define the correct pronunciation of the word. There are 4+1 tones which are described briefly in the chart below:

Wrapping up the knowledge here for you, the last piece of advice is that if you are learning the Mandarin Chinese language, start with pinyin and only move to Hanzi when you have a strong grip on it.

The great news for you is that unlimited pinyin lessons are available on YouTube and many other platforms where you can practice daily.

Pleco & Google translate are the apps for the verification of any word written in Pinyin or Hanzi.

Keep learning till the next blog. Also, tell us in the comments if you want a detailed brief about any other topic related to Chinese language.

About the Author: Basit Hussain